Church Of The Ascension

Found on University Avenue West and McKay is one of the more often overlooked churches in the city, the Anglican Church of the Ascension.

The church as seen today was built in 1927, designed by local architects Nichols, Sheppard & Masson. It was built using only the foundations and tower walls of the first Church of the Ascension that was built in 1907, and destroyed by fire December 22, 1926. Within a year the church was redesigned, rebuilt and rededicated. 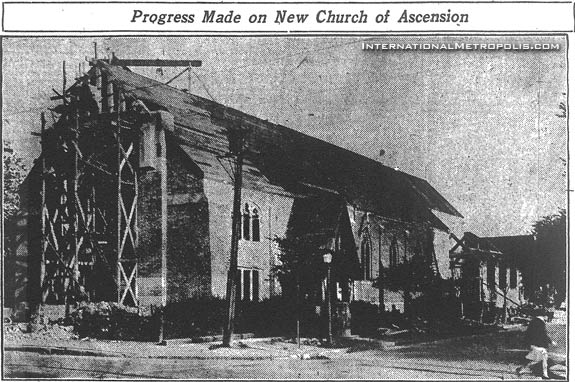 The photo above is from the Border Cities Star, September 27, 1927:

Utilizing only the fire-charred shell of the old structure at London Street and McKay avenue, which was badly damaged by flames just before Christmas, the Anglican congreation of the Church of the Ascension is building a new church which will be half again as big as the old one.

Construction work has been slow, but appreciable progress is shown in the picture above. Only the roof of the old structure is to remain as it was, as new windows will be utilized, and a pillar effect will be given to the interior of the nave.

The parish hall, now used by the congreation for services, will be considerably enlarged when the work is finished. Another structure, to replace the present rectory will be added later. 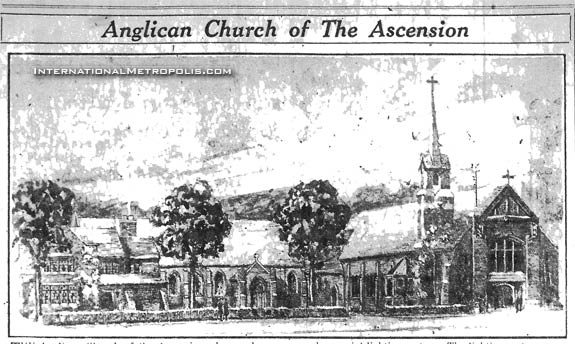 The Anglican Church of the Ascension, shown above, has just been completed and is now one of the most handsome and best-equipped churches in the diocese. Features of the new church structure are a $10,000 organ and a special lighting system. The lighting system is an innovation in church equipment. The new church replaces a former building on the same site, which was destroyed by fire on December 22 last year.

Anyone out there have any memories, or stories about this place?