The other day someone was asking about the old Toledo Scale Plant at Howard and Memorial.

I don’t have much on it but here’s a copy of the Fire Map from 1937. Intersting to note that back then, Ypres and Memorial were two different roads, with Memorial running out to Walker Rd. along the north side of the rail tracks…

The factory with its water tower can be seen in this aerial from the Virtual Motor City collection, dated 1933:

Finally, a few years ago I bought some old photos at an auction that belonged to a man named Charles Kirkwood, who worked for the Toledo Scale Company. He came to Windsor from Ohio sent up here by Toledo Scale, where he stayed and retired. Mr. Kirkwood passed away in the 1970’s. In the collection of photographs, was this photo of what I assume to be the office staff of the Toledo Scale operation in Windsor. The photo was taken outside of the new office building. It was so new, that the outside lights hadn’t even been installed yet… 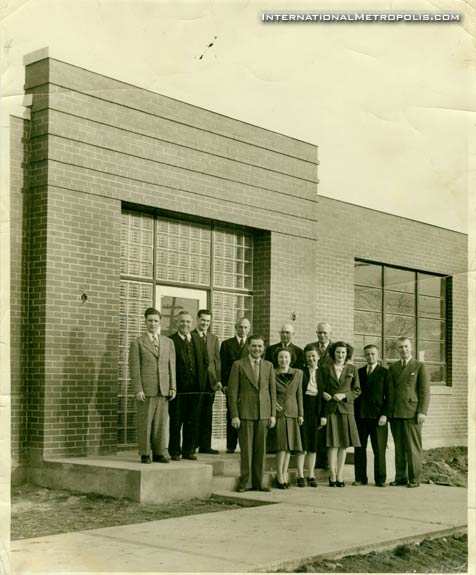 I believe this photo dates to the 1940’s. Charles Kirkwood is the second from the right in the back row.

I’m not sure when the plant wrapped up production here, but Toledo Scale became – Mettler Toledo in 1989 with the merger with a Swiss Company. The plant was demolished around 2001-2003.

Anyone out there have any memories or relatives who worked there?