A sketch of Glengarda Ursuline School, designed in 1938 by J.C. Pennington. 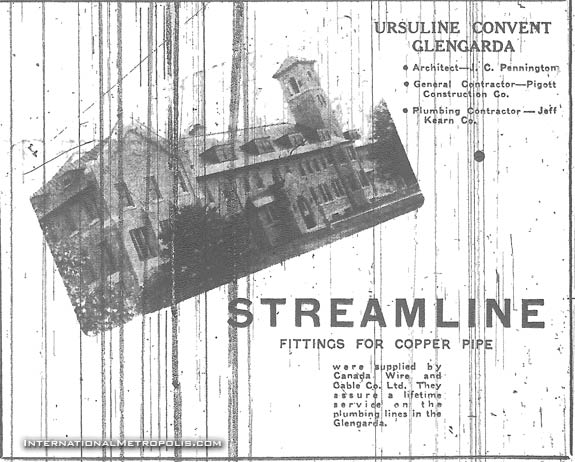 The building opened in 1939, and stood until 1998, when despite being designated, the Mady Corp tore it down for this…

In a booklet issued about the history of Glengarda, to coincide with the new Condos the following is stated:

“Mady Development Corporation was quite prepared to save most of the school building and incorporate it into it’s planned residential development. Those plans were scuttled when the company encountered stiff resistance from local heritage groups who were unprepared to compromise.”

The reaction was so spiteful that even the Gates along Riverside Drive were taken down so no trace remained. Thankfully the Ontario Heritage Act was strengthened a few years back to prevent this type of demolition from occurring again. At the time, even though a building was designated it’s demolition couldn’t be stopped, unlike today.