Today’s photo is for Gary, who posted a comment about my neighbourhood recently. In his comment he talked about living for a while in the Oxford Apartments at Elliott and Louis. 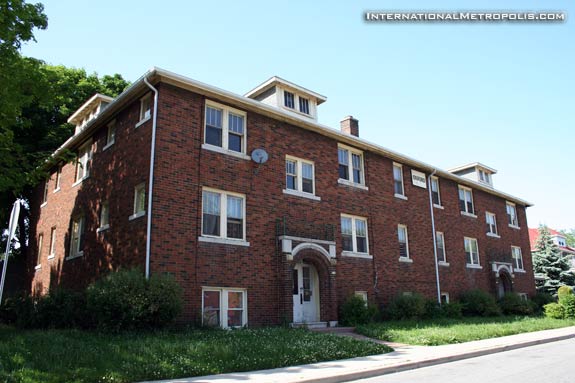 The Oxford is a three story building with dormers on the roof. There are two main entrances and four addresses assigned to the building. There is also decorative iron work above each entrance. 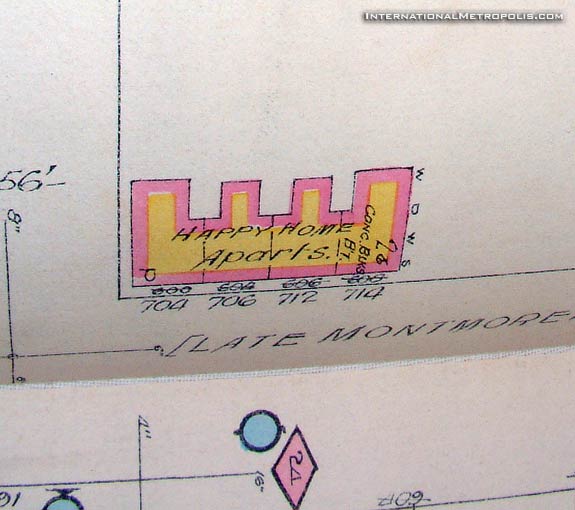 A check of the 1937 Fire Insurance map shows the building listed as “The Happy Home Apartments”. Also of note, with amalgamation, there were a few street name changes too. Elliott St. was the new name of Montmorency as noted on the map.

Hopefully Gary can provide a few more stories about the building and the area.

** Note – This is a busy weekend, lots of neat things going on around town. If you’re free you might want to check them out.

-> Of note this year the manor house will be open, and there is a special exhibion of Windsor’s history inside. The exhibit called “Windsor’s Artful Past” is being put on by the Chris & Elaine Weeks of Walkerville Publishing (Walkerville Times) & The Rotary Club. The details are as follows:

A look at Windsor’s Colourful History Through Art & Photography
It will feature displays and historic photos of:

A must see for any local history fan. Admission to the exhibition is included in the entrance fee to Art in the Park. $5.00 at the gate.

A small antiqute and collectable flea market will be taking place this Sunday June 3rd at the Riverside Arena from 10:00 am to 4:00 pm. The fair has been set up and is being organized by Sally Taylor of Magpie Antiques & Collectables. Magpie is a great local business that has been open for 4 years or so now, and is located on Wyandotte St. E., just west of Pilette.

Admission to the Fair is only $1.00. If you can make it out that way, go browse around, you’ll never know what you’ll find. It will be like going to a buch of garage sales, minus all the junk!

I was going to post this as the following report was issued this AM.

The date for an open house to tour Fordâ€™s Windsor Casting Plant â€” which is winding down for closure after 73 years of operation â€” has been changed to Saturday.

The open house runs from 10:30 a.m. to 3 p.m. and is a fundraiser to support juvenile diabetes research.

Tuesday was the last official day of production at the plant, which has produced 50 million crankshafts and cylinder block castings since 1934.

The public can enter the plant from the companyâ€™s hourly employee parking lot off of Seminole or Ontario streets.

But apparently in one final chance to Shit on Windsor, Ford has changed their mind, and this was issued late yesterday:

Open houses at two Windsor Ford plants Saturday are for employees and their families only.

They are not open to the general public as previously stated by Ford representatives, said spokeswoman Lauren More.

The Windsor Casting Plant and Essex Engine Plant are both holding open houses that are fundraisers for juvenile diabetes research.

Have a good weekend everyone.