I drive past this building nearly everyday on my route to and from work, and there has always been something about it that caught my eye. About a month or so ago, I noticed that the lower doors were boarded up, and driving past it at night, I didn’t see any lights on… 🙁 The kiss of death?

It is located on the west side of Howard between Hannah & Tecumseh. 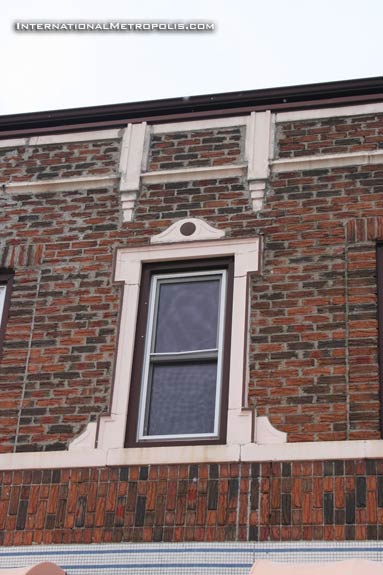 Despite one of the worst repointing jobs ever, the building has some interesting architectural detailing, and interesting brick work.

Built in 1926, the Howard Block has had a long hard life. When it opened in 1926, the ground floor was home to the Bank of Montreal in the northern most retail unit, G. Sgrazzutti & Co. Tile was in the middle, with E.W. Brown’s Drug Store in the southern most unit.

Up top, there were two occupied apartments. One was home to E.W. Brown, and the other was home to Painter and Decorator – Fred Scarboro.

One of my favourite features is the carved pediments over the doors. Likely original, it’s amazing that they have survived 82 years without being tossed aside.

The dreaded utilities disconnection notices. Gas, Hydro & Water are shut off. Hopefully the water was drained from the pipes before the freeze set in…

There is an interesting band of tile work that runs along the lower level of the building. I wonder if it is original to the building, or if it was the work of Mr. Sgrazzutti’s Tile Company when he moved in?

Looking though old directories, it looks as if the building served as the “Maple Leaf House Hotel” for a very long time. From about 1940 until the late 1960’s early 1970’s when the buiding spent some time vacant.

From what I could gather the Maple Leaf House, seemed to be a rooming house/flop house.

Hopefully this building is saved or at least well mothballed, as its loss would leave a huge hole on the Howard Ave. streetscape.

From Wigle Park to Yankee Stadium