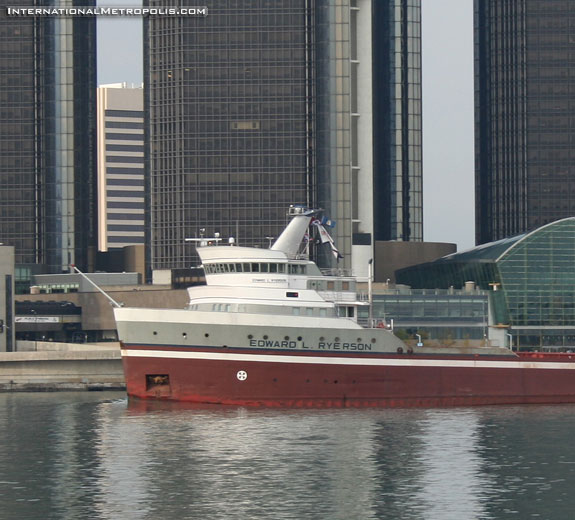 Captured yesterday on the Detroit River is the 730′ long Steamer Edward L. Ryerson.

Built in 1959, this old ship returned to service on the Great Lakes this summer after being layed up since 1999.

The Edward L. Ryerson, is one of only two remaining straight-deck bulk carriers still part of the American fleet on the Great Lakes; the other being the John Sherwin (2). Built as hull # 425 by Manitowoc Shipbuilding Co., Inc. of Manitowoc, WI; the keel for this bulk carrier was laid April 20, 1959. At a snow covered shipyard on January 21, 1960; the new vessel was launched and christened Edward L. Ryerson for her owners, the Inland Steel Co. of Chicago, IL. The new steamer was the first of five American-flagged ships to be added to the “730-class” of lake boats in the early 1960’s; the other four all being former Maritime Commission T2-type tankers converted for Great Lakes service (these being the Leon Falk Jr., Paul H. Carnahan, Pioneer Challenger, and the Walter A. Sterling). The Edward L. Ryerson became the third of thirteen 730′ (222.5m) carriers to eventually share in the “Queen of the Lakes” title for being the longest ships on the Great Lakes. She was also the second American-flagged vessel to share this honor; the first being the Arthur B. Homer launched November 7, 1959. The “Queen of the Lakes” title was thusly shared until December 7, 1962 when the title was passed to the slightly larger Frankcliffe Hall.

The lake boat’s namesake, Mr. Edward Larned Ryerson, was born in Chicago on December 3rd, 1886. He had been president of the steel service center Joseph T. Ryerson and Son, Inc. until 1935 when it was merged with Inland Steel. Mr. Ryerson was chairman of the board from 1940 until his retirement in 1953 of both Inland Steel and his original company. Mr. Ryerson died in Chicago on August 2nd, 1971.

By all accounts, the Edward L. Ryerson would have to classified as the most aesthetically pleasing of all lake boats. From her gracefully flared bow and top of her pilot house to her large but streamlined stack to her rounded and tapered stern and her striking paint job, no expense or effort was spared during her construction to achieve this goal. Over $8 million was reported to have been spent on the accommodations alone. The Ryerson was considered a slightly larger version (basic design and construction) of her 1949-built fleet mate Wilfred Sykes. Regardless of the Ryerson’s appearance however, the bulk carrier was built with one cargo in mind; that being iron ore. Her basically square boxed holds do not favor the carrying of such other bulk cargoes as coal, slag, or limestone due to the difficulty in unloading these cargoes. Any thoughts of conversion to a self-unloader would be even more difficult and expensive as her holds would have to be reconfigured with sloped sides to allow for the free movement of the cargo to the self-unloading conveyor(s).

A sequence of “lasts” are a part of this beautiful straight-decker’s history. The Ryerson was the last American-flagged new ship built on the Great Lakes until the launch of the Stewart J. Cort in 1972. She was the last U.S. laker to be built as a steamer, the last to be built without a self-unloader, the last lake boat to be constructed at the Manitowoc, WI shipyards, and the last and only to be built with such aesthetically pleasing lines.

The Edward L. Ryerson is powered by a General Electric 9,900 s.h.p. cross-compound steam turbine engine (consisting of a high and low pressure turbine) with two heavy fuel-oil fired Combustion Engineering water tube boilers. The Ryerson is capable of speeds up to 19 m.p.h. earning her the nickname “Fast Eddie” as one of the fastest ships on the Great Lakes. Eighteen hatches service 4 holds where the bulk carrier is capable of carrying up to 27,500 tons (27,942 mt) at a mid-summer draft of 28’04 1/2″ (8.65m). Dimensionally, the Ryerson could transit the Welland Canal and St. Lawrence Seaway where she could carry approximately 24,869 tons (25,269 mt) at the new Seaway draft of 26’06” (8.08m) implemented in 2004. The lake boat displaces 8,080 tons (8,210 mt) lightweight. A bow thruster was added in 1969.

The Edward L. Ryerson has had no recordable incidents of any serious nature throughout her tenure on the Great Lakes. The Ryerson did, however, have difficulty before entering service when it was determined after her launch that the new bulk carrier was, in fact landlocked in the Manitowoc River. Fifty feet (15.24m) of Manitowoc’s east dock had to excavated to allow the Ryerson to make the turn and pass through the railway bridge. A downturn in industry forced the lay-up of the Ryerson at Indiana Harbor through the 1986 and 1987 seasons. At that time, when the bulker returned to service in 1988, she was the only remaining American-flagged straight-decker employed exclusively in the iron ore trade. The Ryerson laid up again on January 24, 1994 in Sturgeon Bay, WI. She remained inactive through the 1994, 1995, and 1996 seasons as Inland Steel had chartered the surplus self-unloader Adam E. Cornelius from American Steamship Co. to carry the Ryerson’s cargoes. During this time, the Edward L. Ryerson received a five-year survey (1996) and, with increased tonnage, returned to service on April 5, 1997.

On December 12, 1998; the Ryerson again was placed into long-term lay-up at Bay Shipbuilding, Sturgeon Bay, WI. Also in 1998, her official name was changed to Str. Edward L. Ryerson. Following the purchase of Inland Steel by the Netherlands based Ispat International N.V. in 1998; the three vessels of the Inland Steel fleet were sold to a newly established U.S. firm Indiana Harbor Steamship Co. to comply with the Jones Act. A second new company, Central Marine Logistics of Highland, IN was created to manage the fleet. The other two fleet mates sold to the new company were the Joseph L. Block and the Wilfred Sykes. Following the sale, the â€œInland Steelâ€ name was removed from the sides of the hulls. Since then, the Ryerson was moved to Sturgeon Bay’s east dock on December 7, 2000 and then back to Bay Shipbuilding on August 17, 2004. Her only other “activity” has been to open for public tours (see photos below).

The early summer of 2006 brought a change in the fortunes of the Edward L. Ryerson. With an abundance of cargoes came the need for more reliable hulls to carry them. Having been maintained in an excellent state of readiness, this classic laker was fit out and brought out of lay-up leaving Sturgeon Bay via Sherwood Point on July 22, 2006 under the command of Capt. Eric Treece. Flying her christening pennant, she was bound for Escanaba, MI to load iron ore for Indiana Harbor, IN.