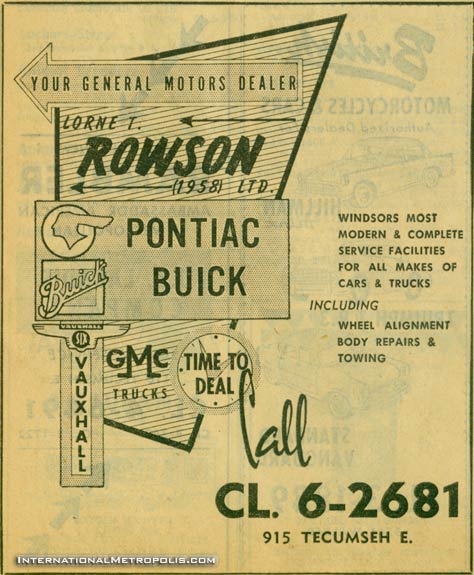 The old dealership at Tecumseh and Parent, just east of the Caboto Club met the building eaters Tuesday afternoon. The ad above for Lorne T. Rowson G.M. dealer is from the 1958 phone book.

The dealership at 915 Tecumseh Road East has been home to many dealerships over the years. Overseas Motors got their start there, before moving to the far east side. Many Windsorites probably remember it as Bill Howitt’s. Also it only looks as if the building on the west side of the lot is coming down, the Rocky Motors portion seems to be staying.

Interestingly enough, the 1937 fire insurance maps list the two buildings as home to “The Bell Telephone Co. of Canada”. Compare the outlines of these buildings, with the aerial photo above, and it would appear that the back section of the building is much older than the rest.

This is the section that appears on the fire insurance maps. I’ll keep an eye on it during demolition to see if any clues are revealed.

By 4:30 Tuesday, the curved glass block section was down.

I’ve got my money on an expanded Caboto parking lot…