There was a big discussion on an old post the other day about the fate of the remains of the Manning House. The Heritage Committee (of which I am a part) voted to not take any action in moving to designate the remaining section when faced with a request for demolition. The plans for redevelopment call for the demolition of the The former Royal Bank Building on the corner of Pitt and Ouellette (built in 1964), the remains of the former Manning House that was built in 1887, and the building around the corner at 25 Pitt St. E. which is home to Patrick O’Ryan’s.

The Border Cities Star ran an article on the history of the site in the Aug. 2, 1924 edition.

According to the story, the site originally contained the Beeman House hotel that was built in 1855 by Mrs. Elam Beeman. The Beeman House burned down in 1887, and the owner at the time, who had purchased it some years earlier from Mrs. Beeman, was a man called Thomas Manning.

The old Beeman house was a two story frame building, and Mr. Manning, immediately went to work on a replacement. The brick Manning House was built and opened in the same year as the Beeman House fire – 1887.

In 1960, the Royal Bank demolished the front portion of the building (everything left of the lamp post in the postcard above) including the entire Pitt St. frontage, and the “new” Royal Bank building opened around 1963. They remained in that location until the newest Royal Bank was opened across the street. For life of me I can’t remember when that was? Must have been around 1999-2000?

Here’s an original photo I have of the bank that was taken in September, 1920.

According to the 1919-20 City Directory, these were the following tenants of the Royal Bank Building when the photo above was taken:

and on the ground floor in the two store fronts:

You can see in the detail shot, that the Manning House name is one from the facade, replaced with the Royal Bank Building.

A detail shot of the remaining section. The two store fronts contain Paul Eberwein’s on the left, and Walton’s Jewellers on the right. You can see “Souvenirs” & “Post Cards” on the windows on the left hand side.

A view of the corner in question. As you can see the best part of the Manning House is long gone. However the fact that anything survived is very interesting to me. I also suspect that the “Canada Gift Shop” is the last section the Manning House that had the bay windows at one time.

First stop is down to the basement. A pile of old doors with the Royal Bank Logo, and check out that beast of a boiler!

Turning to head back up the stairs, I spied this sign for Eberwein’s. Amazingly they were in business for quite a long time.

This photo from the early 1970’s shows Eberwein’s still in business. Note the “Ultimate Topless Body Rub” sign. You’ll see that in a bit…

Reaching the floor above the retail space, a few traces of the past are revealed. A nice old staircase, which is badly water damaged, and borderline rotted… It’s not as nice as it looks in the photos 🙂

The one original doorway with the transom and trim was a nice surprise. This was the only door like this, and the layout of the building was rather strange. Lots of nooks and crannies, and remodelling and alterations haven’t been kind to this place.

The inside of the room with the transom. Apparently it was office #4? Many rooms were filled knee deep with boxes and garbage.

The bathroom to office #4. No toilet, but a very old wash basin.

Looking back at the second floor from the landing. 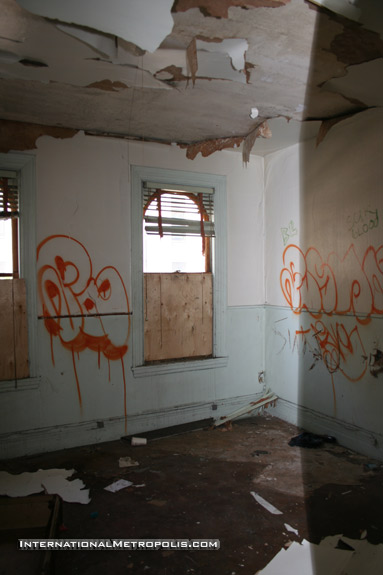 A view of the top floor offices. Much of the top floor is covered in graffiti, and has sections where the plaster in coming down from the ceiling. The building exhibited common signs of water damage. The street level retail spaces had ceiling tiles that had fallen down and were still soaked with water, a floors so buckled that you couldn’t open closet doors.

Judging from the decor of this space, I can only assume that this was the space occupied by the “Ultimate Topless Body Rub”. 🙂

The area had its own staircase and there was a lounge type space on the floor below… You’ll see that in a minute.

Wow. This was/is located in the boudoir type space. It appeared to be a stone kind of fountain and maybe a hot tub. 🙂 Must have been to help you relax before you got your rub down…

A shot of the “lounge”. Note the swanky sectional and cool 1970’s wallpaper.

The front portion of the lounge was filled with garbage and all type of papers. It looks like someone once tried to torch the place.

A view down another corridor. There was no power in the building, and the flashlight we had wasn’t very good. As a result, we didn’t venture down this one.

A view down the alley to the rear shows the poor condition of the structure.

While it looks not bad from the front, the sections of bricks that are falling out shows there is certainly some structural issues with the building. Being of the vintage that it is, the building was built with masonry bearing walls, and the integrity of the building is no doubt compromised due to the poor upkeep over the years.

Demolition is hoped to be underway by October 1st.

While there is likely no bigger preservationist in this city, sometimes buildings have to come down in order to move forward. This is not a case like the Frank Joyce house where, demolition was wanted because the site would be great for high rise seniors towers, the building was sound and architecturally important. Or even the Bank of Montreal at Walker & Ottawa where the building became a parking lot so people can have a better view of the shitty ass strip mall behind it.

This is a situation where the best part of the building was demolished nearly a half century ago, and the part that remains is in poor repair, and after visiting the inside, next to impossible to adapt to modern use. What remains, while a glimpse into the past of Ouellette Ave., is very much out of context with the rest of the block. There is a solid redevelopment plan in place that will remove an eyesore from one of the main corners in the downtown core, and bring in some much needed investment.

If it was going to fall for a parking lot, or just being demolished with no redevelopment plan, then the Heritage Committee would like look upon the demolition much differently.